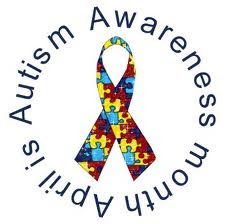 This Friday, April 1st, begins Autism Awareness Month, and the following day is World Autism Awareness Day. Around the Internet, autism organizations have been busily promoting events planned for the month of April to make people aware of the epidemic of autism. Brightly colored autism ribbons displaying the familiar puzzle pieces to represent the puzzle of autism and t-shirts bearing various logos and sayings, such as, “I love someone with autism,” serve to remind people that autism is a serious concern in our society. One of the largest autism organizations, Autism Speaks, has planned an event called “Light It Up Blue” in which they request the use of blue outdoor lights on April 2nd to commemorate World Autism Awareness Day. While they had hoped the White House would participate in this event, the President’s home will apparently not be lit in blue, but the Empire State Building in New York City will mark the occasion and be illuminated in blue lights on this night.

So how does one make others aware if their lives have not been directly touched by a child with autism? Will anyone other than parents and family members of children with autism know what the blue lights on April 2nd mean? This weekend we will not be using blue outdoor lights at our house, not because we don’t support autism awareness, but because Alex despises blue lights, as he has told us repeatedly during the Christmas season when we drive past houses decorated in blue lights, describing them as “ugly” and telling us, “Don’t like blue lights!” Perhaps a better way to inform people about autism is through the media where words can explain what symbolic gestures, such as blue lights, cannot. Last week parents of children with autism launched a written attack on Parents magazine because their April issue did not recognize Autism Awareness Month. After several angry parents posted on the Parents magazine Facebook page threatening to cancel their subscriptions and decrying that the editors were ignoring special needs children, the magazine tried to defend themselves by saying that they had a feature on bed tents for children with autism, and they requested that parents of children submit brief stories about their lives to be published on their web blog. However, some parents felt that this olive branch was a case of “too little, too late” and demonstrated that autism moms and dads will not be silenced, especially if their children have been silenced by autism. Similarly, one look at some of the various autism messages conveyed on t-shirts reveals an angry attitude reminiscent of Robert De Niro’s character, Travis Bickle, in the movie Taxi Driver: “You lookin’ at me?!” With such messages as, “I have autism. What’s your excuse?” and “Hey, keep staring at me and you just might cure my autism. Then we can work on YOUR social skills,” the t-shirts suggest a frustration toward those who don’t understand the behaviors people with autism may display. Last spring, as I searched for an autism awareness shirt, I pored over the various sayings, amused by some and a little surprised by others, and finally found the tone I wanted in the following message: “Autism Awareness—Hope, Faith, Love.” In fact, I liked this message so much, I not only bought the t-shirt but also a tote bag and a button I wear every school day on my teacher identification lanyard. For me, autism awareness lasts not just a month, but 365 (or 366 in Leap Year, as Alex would remind me) days of the year.

My first experience with autism awareness came as a teenager in the late 1970’s when I saw a postmark on a letter that said something to the effect, “Support autism research.” While I don’t remember the exact wording, I do recall not knowing what autism was, and led by curiosity, grabbing a dictionary to find a definition that basically identified autism as an abnormal self-absorption that causes a lack of response to people and difficulty in communication. I remember thinking at the time how sad that must be for parents; now as a parent of a child with autism I know that definition fails to recognize that these children do respond to others, albeit in somewhat atypical ways. This misrepresentation continues today as I see Facebook ads that offer training for special education teachers with headlines such as “Teach Kids with Autism” accompanied by pictures of children hiding their faces or crying. Who would want to teach children who are constantly crying or hiding? I think of Alex, who is smiling the vast majority of the time, and I feel that children with autism are being shortchanged. When Alex was younger, I jokingly used to offer to loan him out to friends during Autism Awareness Month so that they could have a glimpse of what life with autism is really like. One friend half-kiddingly offered to take Alex for a Sunday afternoon during a NASCAR race, knowing that entertaining him that way would be fairly simple. What my friend didn’t realize was that if one of the Busch brothers, whom Alex has disliked for years, had won that race, another side of Alex’s personality would emerge, and a nice day watching sports on television might turn into a full-blown meltdown as Alex would have no trouble communicating his annoyance to everyone around him, contrary to the dictionary definition of autism. From living with Alex, what I have learned since my initial exposure to the word autism is that autism awareness means understanding the unpredictability of the life with autism and realizing that the child can and does communicate, just in different ways. Moreover, instead of just making people aware of autism, we parents need to make the world more tolerant of our children’s unusual behavior. Certainly, unless someone has lived with a child who has autism, he or she cannot completely understand how that condition impacts the lives of everyone in the family. Nonetheless, compassion toward those who are affected by autism instead of judgment makes life easier and helps those parents, like me, who strive to make our children better while holding onto three key concepts: hope, faith, and love.

“For I am always aware of Your unfailing love, and I have lived according to Your truth.” Psalm 26:3
Posted by Pam Byrne at Wednesday, March 30, 2011

Thank you for helping spread the word about autism awareness day coming up! Lets light up the world blue to help defeat autism now!