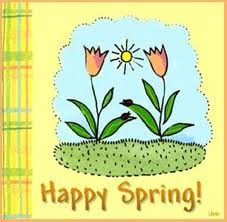 This week, Alex and I are on spring vacation. "Vacation" is really a misnomer because we aren’t actually going somewhere on vacation; perhaps spring break is a better explanation for our situation—we’re on a break from school. Since the university where Ed teaches always has its spring break the first two weeks of March, and the school district where I teach always has its spring vacation the last week of March, our schedules for spring break never coordinate. Not that this difference really matters because we don’t vacation in the traditional sense anyway. Certainly, we enjoy our time off from school, but we spend our time relaxing at home instead of on a beach or at a family fun park. With Alex’s potential to have meltdowns—although less frequent than when he was younger—and his restricted diet that requires planning, staying home makes more sense than trying to deal with issues in unfamiliar settings.

This spring break week, as my friends and colleagues are flying to far-flung places, such as Arizona, Florida, Las Vegas, Cancun, Colorado, and the Caribbean, I’ll be here in Indiana hoping for sunshine. Fortunately, I am a homebody by nature, so staying home never feels like a sacrifice to me. Interestingly, two of my friends who are mothers of teenagers confessed that they would rather stay home, too, instead of going on their family’s planned trips over spring vacation, especially considering all the work involved in packing and unpacking that a trip involves. What they were most looking forward to on their vacations was spending time with their kids, and I can do that at home with Alex more easily than anywhere else. In addition, we can avoid dealing with the rising costs of gasoline, which I fear may upset Alex at some point. A few years ago when gas prices were high, he would have a fit every time we passed a gas station and he saw how expensive gasoline was at the time. Expressing his frustration, he would either throw anything loose he could reach from the backseat (snow scrapers, his sunglasses, books, etc.) at the windshield, or he would slap one of us in the front seat to make his displeasure known. During this time, Ed and I mastered driving places while avoiding any gas stations to prevent provoking the wrath of our backseat driver. Before we went anyplace, we would plot routes ahead of time to make certain Alex would never see the high cost of gasoline, and we learned to take several scenic routes to avoid the dreaded gas stations. Thankfully, gas prices went down, and Alex got over that obsession, but we worry that behavior might return, should he be agitated by rising costs again. Of course, this problem makes travel with Alex difficult, if not impossible.

Fortunately, Alex has simple tastes, finding joy and adventure in everyday experiences that most people take for granted or even find annoying. To begin our spring break, we spontaneously decided the other afternoon to go shopping at Walmart, his favorite place, with my mom. Although most teenage boys would rather be caught dead than shopping at Walmart with their mothers and grandmothers, Alex had a high old time pushing the cart for us, and he patiently listened as we discussed the merits of various toilet bowl cleaners and which flavors of sugar-free Jello tasted best. After we were done with our shopping, we took him to his current favorite section of the store, office supplies, where he happily looked at calculators and label makers, never touching anything, just tilting his head to see their various features. (His previous favorite section of the store was pet food, where he searched for the big bags of dog food and wanted to see the ones that contained the most pounds of food.) With a bemused smile, he waited calmly in the checkout line as the woman in front of us had difficulty using her credit card. Since he had been so pleasant, we decided to take him to an even-bigger array of office supplies at Staples, where he was pleased to view a large display of one of his favorite things, calendars. Again, he never touched anything in the store, just walked along and browsed contentedly. To reward him for his good shopping behavior, we took him to one of his favorite restaurants, a 1950’s style diner that plays golden oldies he enjoys. Sitting in a corner booth we call the Bob Dylan booth because Dylan’s Nashville Skyline album hangs on the wall above it, Alex always smiles as the pictured Bob tips his hat to him as if in greeting. Downing three large Sprites, Alex grinned as he listened to our animated conversation, never interrupting once. Certainly others probably have more exotic experiences during their spring breaks, but I doubt they enjoyed themselves any more than the three generations of us did on that cold, sunny afternoon in Indiana, running around doing mundane things. After all, life is about whom you’re with, not where you are, and Alex has learned that truth early and appreciates those experiences, never feeling that he is somehow missing out on other adventures in life. His contentment brings joy to those around him and makes us feel proud to have raised such a wise young man.

“Enjoy what you have rather than desiring what you don’t have.” Ecclesiastes 6:9
Posted by Pam Byrne at Sunday, March 27, 2011