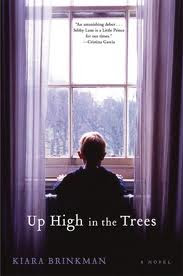 Although nearly all of the books I have read about autism are nonfiction, occasionally I find some interesting fiction that features characters with autism. A few weeks ago, as I was browsing through the bargain books at Barnes and Noble, I ran across Up High in the Trees by Kiara Brinkman, a novel whose main character, Sebby Lane, has autism. Sebby, an eight-year-old boy, also narrates the story, which makes the book especially intriguing because he shares his thought processes that often resemble free association. For example, he muses on his teacher’s name: “Ms. Lambert. Lamb like a soft, white lamb and Bert, like on Sesame Street. It’s a funny name to think about.” Like many children with autism, Sebby notices sensory details in depth: “The desk smells like scratchy blue cleaning powder.” In addition, he has difficulty interacting with peers; his only friend is a girl named Katya who recently came from Russia and knows limited English. Perhaps what is most endearing and enlightening about Sebby is how he reveals his thoughts and feelings regarding his dysfunctional family in letters to his teacher, Ms. Lambert. For example, he writes to her, “Mother is not here. She’s a picture in my head. She’s laughing with her eyes closed.” In another letter he tells Ms. Lambert, “I do like you and I like how your black and white chapstick smells.” Sebby seems to sense in his teacher a stability that his family lacks due to tragedy, and he reaches out to her for reassurance.

In a similar book I recently read, Mockingbird, author Kathryn Erskine’s main character has Asperger’s syndrome. My friend K.C. recommended this young adult novel, knowing that I would find the perspective of the narrator, fifth grader Caitlin, interesting. Like Sebby, Caitlin has difficulty making friends with her peers, but later in the book, she befriends a first grade boy named Michael, whom she feels a need to protect. Despite working with a school counselor to improve her social skills, Caitlin struggles with interpersonal communication. Throughout the book, she constantly reminds herself of the social lessons she has been taught, such as, “Look At The Person” and “Good remembering Your Manners.” Another issue she shares with Sebby is her sensory defensiveness, describing her aversion to bright lights, itchy clothes, and noise. Recess time is especially difficult for her because of the noisy chaos and the expectation for her to interact with other children, who reject her because of her unique behavior. Both novels realistically portray how typical children often respond to peers with autism; perhaps tolerance of special needs children should be emphasized more, especially when these children are frequently mainstreamed in regular education classes. Despite the obstacles both Sebby and Caitlin face, they each possess a strong spirit that allows them to deal with the problems they face, making them admirable, even heroic characters.

While I enjoyed both Up High in the Trees and Mockingbird, I found the authors’ choosing to place both Sebby and Caitlin in tragic circumstances unnecessary. As if dealing with autism and peer rejection were not difficult enough, both characters face tragic losses of their beloved family members who provide strong emotional support. Sebby’s devoted and understanding mother is killed by a hit-and-run driver while out jogging, and Caitlin’s protective older brother is killed in a school shooting incident. In addition, Caitlin’s mother has also died, leaving her with only a grief-stricken father who can barely function, let alone meet her special needs. Similarly, Sebby’s father struggles with his own grief to the point he can no longer care for himself or his children. Fortunately, Sebby’s older brother and sister help care for him, but they, too, deal with grief and cannot completely understand Sebby’s autism. Children with autism have enough interesting dimensions to their personalities that these characters should not need additional heartbreaking obstacles to face. Ironically, Sebby and Caitlin, despite their difficulties with social interaction, become the most sympathetic characters as they work through their own grief, worry about others, and attempt to comfort family members who continue to grieve. Perhaps this approach is what the authors intended to show--that children with autism can surprise people with their ability not only to feel emotions more deeply than might be expected, but also to express care and concern as they step outside themselves to help others. Nonetheless, I appreciate the effort both Kiara Brinkman and Kathryn Erskine make in their writing to show how the mind of a child with autism may work and to demonstrate how lovable, admirable, and amazingly resilient these children really are.

“And anyone who welcomes a little child like this on my behalf is welcoming me.” Matthew 18:5
Posted by Pam Byrne at Wednesday, March 23, 2011

I agree! While I loved the perspective of Mockingbird, I found myself thinking that enough was enough. I think I'm just getting to the point in my life where I want peace. Maybe I'm a hopeless Polyanna, but I want joy and love, compassion and understanding for all. :)

Hi K.C.,
I totally agree with you. I stopped reading depressing books because I need stories that uplift me--I guess that makes both of us Pollyannas, but I have no trouble being a "glad girl"!
Love,
Pam