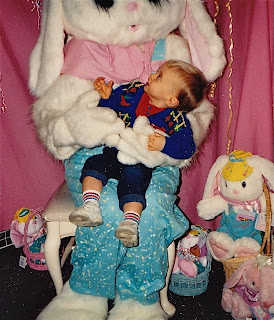 When I went down to the basement yesterday to get out Alex's Easter basket, I decided to pull out our photo albums to find Easter pictures of him. In many of the pictures, Alex is digging into the same Easter basket he's had every year, a gift from Ed's dad for Alex's first Easter. Among my favorite Easter photos are the ones where he's sitting on the Easter Bunny's lap. Even though Alex never wanted to sit on Santa Claus' lap, he adored the Easter Bunny and had no trouble being friendly with the giant animal with big ears [as pictured at left, the Hallmark Crayola Bunny with Alex, age fifteen months]. Perhaps Alex's early fondness for the book Peter Rabbit and the Bugs Bunny cartoons made him generalize that rabbits are funny and loveable. As with Santa, we allowed Alex to believe that the Easter Bunny was real far longer than most children do because he seemed to enjoy the idea so much.

In addition to waiting for the Easter Bunny, one of Alex's favorite Easter traditions when he was younger was coloring and decorating eggs. Using coffee cups filled with Paas egg dye, vinegar, and water, he and I worked together to color hard-boiled eggs. He also liked putting stickers that came in the dye kit on the eggs. We continued this tradition until a couple of years ago when Alex seemed to be doing the task out of obligation instead of for fun. Apparently, he had decided that he had outgrown coloring Easter eggs, which actually came as a relief to me. As the only one in our house who will eat hard-boiled eggs, I no longer had to make sure the Easter eggs got eaten before they went bad. Since Alex doesn't like hard-boiled eggs, we've had to be creative about what treats to put in his Easter basket. With his strict gluten-free and casein-free diet, he can't eat many typical Easter candies. Fortunately, he likes marshmallow Peeps candy, which he can eat on his diet. Of the various choices of chicks and bunnies in pastel colors, Alex's favorite Peeps are blue bunnies. Besides blue bunny Peeps, he also likes Kraft marshmallow bunnies that come in a mix of pastel colors. Along with the marshmallow Easter candies, he also finds jelly beans in his Easter basket every year.

Because of his great interest in calendars and numbers, Alex has a fascination with the way Easter falls on different dates, ranging from March 22nd to April 25th, depending on when the first Sunday falls after the full moon after the vernal equinox. He has studied the patterns of Easter dates in depth by reading about them online. Without missing a beat, he informed me that the earliest Easter in his lifetime was March 23, 2008, and added that early date will not happen again "in the near future." Today's late Easter date of April 24th beats his prior late Easter of April 23, 2000. Somewhere in his mind, Alex has memorized a spreadsheet of Easter dates and the years those dates fall, and he's proud that he can access that information easily. What I'm most proud of as his mother, however, is that Alex understands the true meaning of Easter. Even though we haven't been able to attend church because the crowds would overwhelm Alex, we've striven to instill religion and faith into him. When I asked him yesterday why we celebrate Easter, without hesitation, Alex responded, "Jesus was crucified and came back to life." Knowing that he understands and believes in the resurrection gives me comfort that he grasps one of the essential tenets of Christianity described in John 3:16: "For God so loved the world, that he gave his only begotten Son, that whosoever believeth in him should not perish, but have everlasting life." What greater gift could there be?!

"The apostles testified powerfully to the resurrection of the Lord Jesus, and God's great blessing was upon them all." Acts 4:33
Posted by Pam Byrne at Sunday, April 24, 2011