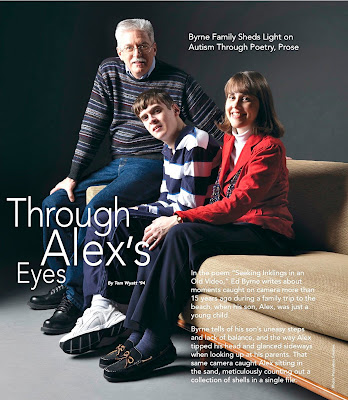 A few months ago in an entry entitled "Family Portrait," I described that Ed and I were interviewed for an article that was to appear in the spring edition of Valparaiso University’s Valpo magazine. The editor of the magazine had read Ed’s Autism: A Poem blog, a collection of poems about autism inspired by our experiences with Alex, as well as my One Autism Mom’s Notes blog, and he wanted to focus on our life with autism and how we write about Alex from different perspectives. In addition to interviewing Ed and me separately, he arranged for a professional photographer to take a picture of the three of us—our first family portrait in more than fifteen years. Despite my initial misgivings about how Alex would react to the photo session, he thoroughly enjoyed himself, thanks to the photographer, whose warmth and friendliness put all of us at ease, especially Alex, whom he actively engaged in the process through teaching him some basics about photography.

Similarly, the editor who interviewed Ed and me also put us at ease by the way he questioned us in a sympathetic yet enthusiastic manner. After spending an hour asking Ed questions in person, he talked with me over the phone for about a half hour, asking me some of the same things he had asked Ed, to see if I felt the same way on certain issues. Once he had organized the information he’d gathered from us and had written the article, he was kind enough to send us a draft so that we could read it and suggest any changes prior to publication. Both Ed and I were very pleased with what he had written and felt that he had clearly captured our experiences in a beautifully written article. Interestingly, he also conveyed in his writing the contrasts in our personalities: Ed, the New Yorker, ever realistic and tell-it-like-it-is, and me, the Midwestern Pollyanna, always optimistic and looking for the silver lining in the clouds. Moreover, even though he couldn’t interview Alex because of his difficulties in expressing himself verbally, he depicted Alex accurately through the details Ed and I had provided in our comments.

While some parents of children with autism protect their privacy fiercely, never revealing their last names, using pen names, calling their children by generic nicknames, and hiding their images in photographs or by never showing pictures of the children, we decided to be open with our identities and our experiences. Perhaps if Alex were younger, we might have felt a need to be more guarded with information, but now that he is nineteen, we feel less inclined to hide his identity. Certainly, I understand those who wish to protect the privacy of their families, especially their children, but we have not felt the need to hide Alex and our stories from the world. In fact, we hope that by telling our story, other families who have children with autism might feel less alone knowing that others are going through similar experiences. In addition, we hope that those whose lives have not been directly touched by autism might gain some understanding so that when they come in contact with a child who has autism, they might find compassion for the child and his/her parents. With that in mind, I’m pleased to share the link from the recently issued Valpo magazine article that gives a glimpse into our lives, especially as the title states, “Through Alex’s Eyes.”

I read the article when your husband first posted the link at One Poet's Notes. I think the article is well-written, insightful, and most of all honest. It is tender in detailing what has been given up (such as opportunities to have an active social life) and so clear about your love for Alex and the gifts available to you when you look at life through his eyes.

I'm smiling through tears, Pam. It's a wonderful article that really shows how much you and Ed love Alex and how much we all have to learn from others in our lives.

This is Sharon Kaufman-Nutter writing & I had to reach out b/c Tom and I just read your article in VAlPO and I was so touched. I have 3 girls of my own now (12,9,6yrs), the youngest one adopted from China. Parenthood is so challenging and my heart goes out to you & Ed as you've struggled to raise Alex with his unique set of issues. I'm sure you saw it, but I recently viewed "Jabberers & Wretches" in the theatre & it profoundly moved me (documents lives of 2 adults w/ autism). Anyway, you still remain an inspiration to me. Take care, Sharon

p.s. Never went back to teaching English after my first was born!

I really appreciate your kind comments. :) We were very pleased with how the Valpo piece portrayed our life with autism, and we are happy that others enjoyed reading the article. Sharon, how wonderful to hear from you after so many years! I'm glad that your family is doing well and that you're enjoying being an at home mom; I'm sure you're terrific with your girls. Again, thanks for all the nice comments about the article and my blog post.
Take care,
Pam