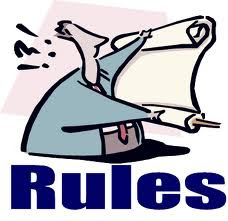 The other day I was digging through a desk drawer and ran across a reminder of a younger version of Alex. Typed neatly and carefully placed in a clear plastic sheet protector was a list entitled “Alex’s Rules.” Although I’m not sure why I saved this rules sheet from probably six years ago, I do remember that we used to have it hanging on our refrigerator as a constant reminder to Alex about appropriate behavior and what would happen if the rules were not obeyed.

The rules listed on the sheet are concise and clear and reflect some of the issues we were dealing with when he was a young teenager. The first rule, “No bad words,” was instituted because Alex thought it was amusing to say profanities to get reactions. He knew that cursing at inappropriate times, such as when we were waiting at the checkout counter of stores or when we were pulled up to a speaker in a drive-through lane would mortify Ed and me, which he found hilarious as he would burst into a fit of giggles after saying something rude. Despite our best efforts to ignore his “F-bombs,” we couldn’t hide our embarrassment when he chose to unleash them in public. The next item on the list, “No throwing, kicking, hitting” reveals the beginnings of his anxiety attacks becoming aggressive and physical. Instead of crying when he was upset, Alex would punctuate his frustration or fears by hurling something across the room or letting us know his displeasure by kicking or hitting us. Fortunately, he has learned better self-control over time. Another rule, “No whining,” reminds me that he used to drive us crazy with complaining in a whiney voice; thankfully, that stage did not last long. The final rule of the four, “No arguing,” probably shows how typical Alex was at that age, challenging what we told him, trying to assert his independence. Realizing that Ed and I were not going to change our minds when he whined or argued, Alex soon learned that these actions were wasted energy and outgrew these behaviors fairly quickly, as he also did with saying bad words. In fact, I haven’t heard Alex whine, argue, or say any profanities in years, which shows that he has matured over time and learned appropriate behaviors.

Below the list of rules on the typed sheet are the potential “Consequences” for breaking the rules. The three possible consequences Alex faced included the following: going to his room, not going places, and/or no Saturday surprise. Essentially, we were using traditional methods—time out, grounding, and denying rewards. As I recall, sending him to his room was not terribly effective because he liked going to his room; he would simply read a book or play a handheld game. On the other hand, being threatened with not going places, something he eagerly anticipated every day, worked like a charm. However, when we reminded him that having to stay home was a possibility, he would sometimes launch into arguing or whining, which didn’t help his case at all. The reward system, which I described in an earlier blog entry entitled “Using Rewards,” required that Alex behave himself fairly well for a week in order to receive a small token, such as a book, toy, or money, called a Saturday surprise. We found that the threat of losing a Saturday surprise worked much better later in the week when the reward was imminent. Earlier in the week, I think Alex believed that he had time to redeem himself if he acted up, or maybe he thought we would forget about the behavior that might prevent his receiving the Saturday surprise. Nonetheless, this system usually worked reasonably well as Alex tried to behave well enough to get his weekly prize. In reviewing this rules list, I am reminded of the progress Alex has made and continues to make, and I feel grateful that we no longer have to listen to him whine, argue, or say profanities. Extinguishing these negative behaviors gives us a sense of accomplishment as well as a feeling of relief that Alex has, indeed, matured and can use language in a positive, rather than negative, way.