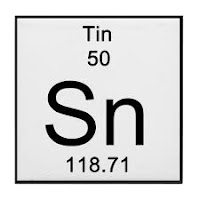 One advantage of having a child with autism in the Information Age is the ability for parents to access research easily and to compare notes with other parents in similar situations. Through online support groups, parents of children with autism can share ideas and brainstorm solutions. Last week, an online autism parent group had a discussion regarding tin. One of the mothers had her child tested for metal toxicity, which is common in autism, and discovered that her child has high levels of tin in his system. To prevent further exposure to this toxic metal, she wanted to know what might have caused her child to have tin poisoning.

Her surprise and concern mirrored my own responses when we discovered that Alex had heavy metal toxicity. Although I initially feared mercury poisoning from the preservative thimerosal found in vaccines when we had him tested as a child, his mercury levels were slightly elevated. However, he had the highest levels of arsenic in his system that his doctor had ever seen. Immediately, I began searching for the source of arsenic that may have poisoned Alex.

Some online searching led me to the likely source: chromium copper arsenate (CCA), an arsenic compound used a preservative for outdoor lumber until 2005. The backyard deck we built when Alex was a baby was made with CCA-treated lumber. At the time, we didn’t know that treated lumber contained arsenic. It’s quite likely that after crawling around on the chemically treated deck, he picked up the arsenic on his hands, and his hands likely found their way to his mouth. When we built a new deck, we were certain not to make the same mistake again and made sure the deck was built with lumber that did not contain arsenic. However, we had to address the arsenic already in Alex’s system, and oral chelation therapy with a sulfur-based compound successfully eliminated toxins.

In discussing possible sources of tin poisoning, one of the parents in the group explained that tin is in the air and soil, which makes avoiding it nearly impossible. Another parent offered a suggestion that I had never considered: toothpaste. She explained that stannous fluoride, present in some toothpastes, is a tin compound. Indeed, “stannous” means “of tin with a valence of two.” Immediately, I checked the toothpaste Alex uses regularly, the one recommended by his dentist and provided as a sample every time we have his teeth cleaned. That well-known brand of toothpaste, indeed, contains stannous fluoride.

This was not the first time I discovered that the toothpaste Alex was using contained an ingredient I would prefer he not have in his mouth. A few years ago, I found that the toothpaste he was using contained triclosan. In September 2016, the U.S. Food and Drug Administration ruled that so-called antibacterial soaps containing triclosan could no longer be on the market. [For more information about this ban, please click here.] The FDA determined that these products could not prove scientifically effective in preventing the spread of illness and infection. In addition, the FDA cited safety concerns, specifically bacterial resistance and hormonal effects, in its ban on triclosan. However, the agency permitted continued use of triclosan in hand sanitizer, products used in health care settings, and toothpaste. Why the FDA allowed a substance considered not effective in dealing with bacteria––as well as potentially harmful––to remain in toothpaste is beyond me. Nonetheless, I threw away Alex’s toothpaste containing triclosan.

On its website, the toothpaste company Colgate offers more information about types of fluoride in an article titled, “Stannous Fluoride Toothpaste: Pros, Cons, and Alternatives,” written by Jenny Green. [To read this article, please click here.] In this article, the author notes that the two most common forms of fluoride found in toothpaste are stannous fluoride and sodium fluoride. (I am aware that some people have issues with using fluoride of any kind and avoid it altogether.) Citing research from the Archives of Oral Biology, the author notes that stannous fluoride is most effective at reducing bacteria that forms plaque on teeth. However, stannous fluoride can leave stains on teeth and because it contains tin, can cause a metallic taste. By contrast, sodium fluoride does not leave stains, does not contain metal, tastes better, and can “provide an effective alternative.”

Consequently, I bought Alex a tube of the same toothpaste I use, one that contains sodium fluoride. Not only will he no longer be exposed to tin in his toothpaste twice a day, but I’m also hopeful that removing a metallic taste from his mouth may help improve his appetite. Perhaps his frequent complaint that foods taste bad may be because the stannous fluoride he’s been using has left a bad taste in his mouth. While I’m annoyed I didn’t figure out that stannous fluoride contains tin until a few days ago, I’m determined that Alex will no longer use toothpaste that contains that ingredient any more.

For many people, stannous fluoride probably causes no problems. However, those with autism who have trouble detoxifying heavy metals and other harmful substances should avoid chemicals that could impair their health. While one would think that the Food and Drug Administration would ensure the safety of common products, such as toothpaste, the continued presence of triclosan and stannous fluoride shows that consumers must always read labels and be aware of potentially dangerous chemicals. Parents of children with autism must be especially vigilant because our children are more susceptible to environmental toxins. Moreover, once those dangers are discovered, changes must be made to protect our children. After all, helping our children be as healthy as possible is one of our greatest responsibilities as parents.