To Be a Friend 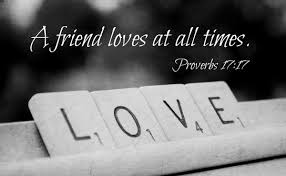 “What does Alex want for Christmas this year?’ asked one of my colleague friends this week. As I explained that he has not given me any ideas but seems to trust my gift selection judgment, I was pleased that she had asked about him. However, I was not surprised by her interest because she has known him all of his life and has always shown genuine affection toward him. When he was little, she would let him sit in her lap and type on her computer. In addition, she would have him check the large calendar on the wall made up of number tags placed on hooks to make sure the days and dates were accurate, knowing his love for calendars and his eye for detail. Her daughter has the same birthday as Alex, so she and I always remember to pass along birthday wishes. Over the years, she and I have shared concerns and celebrated milestones, and I have appreciated that she never fails to ask about Alex and how he is doing.

Later in the week another colleague friend and I compared notes about how our adult sons are doing. She remarked of her son, “This isn’t the life I would have chosen for him, but he’s happy, and that’s what’s important.” I understood completely because I could say the same thing about Alex. She, too, has known Alex all of his life and has taken a keen interest in him, always asking how he is doing and celebrating his progress with me. Moreover, she is one of the most faithful readers of my blog who often writes kind and thoughtful comments in response to my posts. Not only does she cheer for Alex, but she also cheers for me. That friendship is precious to me.

Recently, another colleague friend who also faithfully reads my blog told me, “When I grow up, I want to be Alex.” She went on to explain how pleased she is now that he is able to do fun activities, such as going to concerts and basketball games, because he has improved so much. As we often talk about our adult children who are nearly the same age, we find a great deal of common ground, despite the impact autism has on Alex’s life. In addition, she has passed along her compassion to her children, who also take an interest in Alex. In fact, her sweet son sent back gifts (a commemorative lanyard, a Dale Earnhardt, Jr. model car, and an autograph from the winner of the race) from last year’s NASCAR’s Brickyard 500, knowing that Alex is a huge NASCAR fan. Her enthusiasm for Alex’s accomplishments makes me thankful to have her as a friend.

Along with these three special women, I have been blessed with other people in my life who have been loyal and true friends, consistently taking interest in Alex. One of my male colleague friends who has now retired used to ask about Alex’s current interests with, “What’s Alex into these days?” Another now retired male colleague endeared himself to me by his sincere and consistent interest in Alex, always asking me to say hello to Alex for him. Because autism impairs Alex’s social skills and hinders making friends on his own, I am grateful for my friends who treat Alex as their friend, too.

On the other hand, I have some people whom I consider friends who rarely if ever ask about Alex, even when we have long conversations about their children. I would think that the natural inclination after telling about their kids would be to ask, “How’s Alex?” To be honest, this oversight hurts my feelings, even if it is unintentional. Maybe they think that talking about an adult with autism is uncomfortable, like talking about someone who has passed away. I suppose they could be so busy with their own lives that they don’t have time for mine. Perhaps now that he’s an adult, people just don’t know what to say or ask. However, simply asking, “How’s Alex?” would be more than enough for me.

On Fridays, Alex’s behavioral therapist and I take him out in the community so that he can practice the social skills and language skills he has been learning. One of our favorite places to go is the nearby Burger King, where the employees are especially friendly and kind to us. Two of the ladies have taken a special interest in him, and now he is on a first-name basis with them. Alex is to Burger King what the character Norm was to the television show Cheers. When he walks in the door, they call out his name, which delights not only him, but also his therapist and me, too. He rewards their kindness with a big smile, says hello to them by name, and then tries to control his excitement at seeing them by leaning forward and putting his hands between his knees as he shudders with joy. I have to think that his obvious enthusiasm in seeing them makes their day.

Last Friday, the two Burger King ladies whom Alex considers his friends gave him a beautiful Cubs World Series commemorative ornament they had especially made for him and personalized with his name on it, knowing that he is a huge Cubs fan. While Alex isn’t always able to express his feelings easily, I think they could see how tickled he was by their thoughtful gift. Of course, as his mother, I was quite touched by their kindness. That ornament now holds a place of honor on our Christmas tree and will always remind us in future years of two women who saw the good in Alex and reached out to him in friendship. Their kindness will be remembered, especially by Alex, who every night in his prayers requests: “God bless Tammy and Cassie.” Indeed, God bless those who bless our lives with kindness.