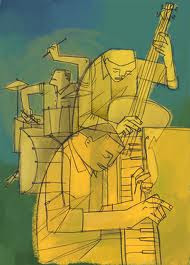 Last week we took Alex to a jazz concert at Valparaiso University, which was the highlight of his week. As I mentioned in my blog entry “Music,” Alex loves several types of music, but jazz is a particular favorite of his. Like most special events, we waited until the last minute to tell him that we were going to the concert. If something interrupts our plans, we don’t want him to be disappointed. Moreover, despite the stereotype that people with autism prefer routines, Alex really enjoys spontaneity. If we suggest going someplace on the spur of the moment, he eagerly jumps up and runs to the bathroom in preparation for leaving. Since he goes around the house barefoot most of the time, he then takes off to get his shoes and socks. In between these activities and while waiting to leave, he often engages in what Ed has dubbed the “happy hop,” a spirited gallop Alex—at nearly six feet tall—does through the house when he’s pleased and excited about something.

Whenever we go to events, we carefully choose seats that easily allow quick exit in case Alex decides he’s had enough. At the concert we were able to find aisle seats near the door in the first row of an upper tier that provided a good view of the stage. The V.U. Faculty Jazz Trio, consisting of talented musicians who play piano, bass, and drums, performed that night. In addition, special guest performer Frank Catalano accompanied them on saxophone. While Alex seemed to enjoy all of the songs they performed, he especially liked Frank Catalano’s original composition “God Made It Beautiful.” [Click here for an excerpt of this song Alex enjoyed so much.] During the concert, which lasted over an hour with an encore, Alex displayed improvements that we have noticed in the past several months. First, despite being in an audience of about two hundred people, he did not seem bothered at all by the crowd or by the noise. Also, he has learned appropriate social behavior, namely being quiet during the concert, yet applauding at the proper times. Unlike many of the college students there, who are about the same age as Alex, he didn’t keep checking a cell phone for messages or texting people during the show. Even if he had a cell phone, I doubt Alex would want to be distracted while he was engaged in something as enjoyable as a concert. More evidence of his progress lies in his ability to keep time by tapping his hand on his leg. Prior to beginning music therapy nearly a year ago, he did not have a good sense of rhythm. Now he can move in time with the beat.

For me, the best part of the concert was watching Alex’s reactions of sheer joy in response to the music. Most of the time, he had a big smile on his face, and at times he would sway to the beat. Occasionally, he would be so overcome with happiness that he would shudder, as he often does when he is delighted and unable to hold back the joy he feels. Watching his contentment, I realized how truly blessed we are that Alex is so happy. While I have felt sorry for him through the years because I thought autism denied him a typical childhood, I now realize that he’s much more content than most people his age. Seeing him react to the music, I noted that he can express his emotions without inhibition and can find happiness in simple things. Because he doesn’t care about appearances, Alex reflects honestly what he feels. Most people worry about what others think of them and use restraint in showing their emotions. Although they may be saying, “Goody, goody” on the inside, they act cool and don’t always let on how thrilled they truly are. However, Alex lacks a poker face and lets everyone around him know how clearly thrilled he is, and in doing so, shares the joy in his contagious enthusiasm. He sees the world in the words of jazz musician Frank Catalano: “God made it beautiful.”

“He has given me a new song to sing, a hymn of praise to our God. Many will see what He has done and be amazed. They will put their trust in the Lord.” Psalm 40:3
Posted by Pam Byrne at Sunday, September 05, 2010

I was particularly moved by the entry on your blog concerning the concert. Thank you for sharing this with us. I've always felt that each of us is on this planet for a specific reason. As a musician I believe our job is to bring joy, happiness, relief, release and in general, help enrich the lives of others through music. As drummer Art Blakey used to say "music washes off the dust of everyday life". This instance exceeds the norm and I am grateful to have been a part of it. I hope you will continue to attend and bring your son to our performances.

Dear Mr. Foster,
Thank you for your nice note. I appreciate your kindness, and I am especially grateful for the joy your music brings my son. You can be sure that we will look forward to seeing the Valparaiso University Faculty Jazz Trio perform again soon; after all, Alex is one of your biggest fans!
Take care,
Pam

Thank you for including the excerpt of Frank Catalano's composition. I played tenor sax from the 7th grade through college, mostly in "big band" style and enjoyed Frank's music.

Your blog is wonderful and like your other fans, I'm waiting for the book.

Hi Fred,
Do you ever still play your tenor sax? You should make a video of yourself playing it and post it online; Alex and I both would love to see it. :) Thanks so much for faithfully reading my blog and for your encouraging words. Your comment a few weeks ago about the "Julie/Julia" blog made me think that these bi-weekly entries might be first drafts of a bigger project. ;) Right now, I'm just enjoying writing Alex's story and am pleased to share him with people. Thanks again for your kindness!
Take care,
Pam